THE WAY OF THE VEGAN MEATHEAD: EATING FOR STRENGTH (Second Edition) eBOOK 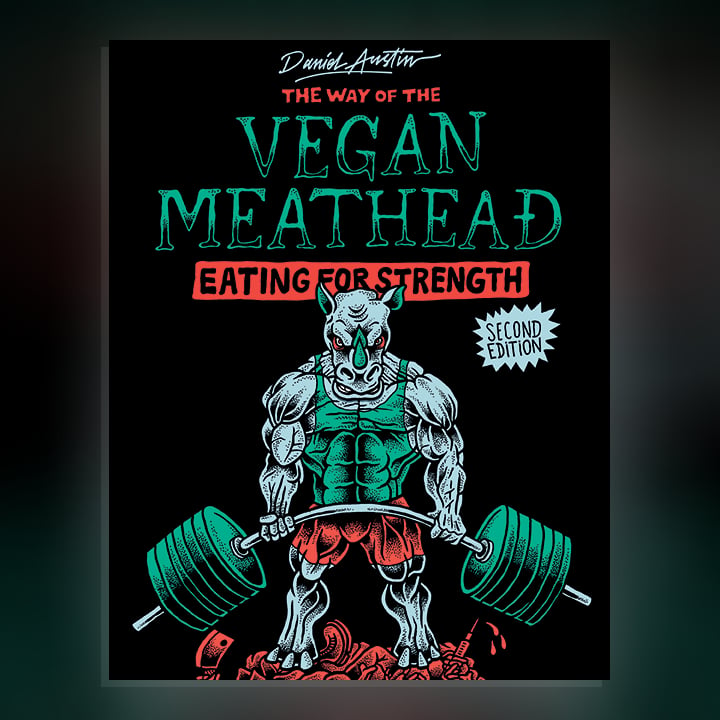 THE RHINO IS BACK. The new and improved SECOND EDITION of THE WAY OF THE VEGAN MEATHEAD: EATING FOR STRENGTH.

In the second edition of The Way of The Vegan Meathead, champion powerlifter Daniel Austin demolishes the mass of lies you’ve heard about the “difficulties” of building strength on a vegan diet. He’ll show you how eating to become a Vegan Beast is easier than you ever thought it could be.

After going vegan in 2005, Daniel has gone from being the stereotypically “skinny vegan” to winning competition medals on national and international platforms, continuing to hone greater strength year after year, proving that veganism is no impediment to fitness–so long as you know how to build your diet in accordance with your goals.

With an hour-by-hour, calorie-by-calorie meal plan that comfortably overshoots protein requirements for strength athletes, The Way of The Vegan Meathead will have you poised to achieve new personal records and leaner body composition in no time. Packed from cover to cover with seemingly unconventional yet easily digestible expertise regarding nutrition, supplementation, and ample doses of motivational shit-talking, this book will drag you by the collar to meet your new, stronger self. You’re welcome.

PRAISE FOR DANIEL AUSTIN and THE WAY OF THE VEGAN MEATHEAD:

“The rise of the vegan athlete is undeniable, and the time has come for the general population to recognize that vegan athletes have a place at the table. Daniel Austin has been a powerful voice contributing to the growth of the vegan movement, because his actions speak as loud as his words. As a nationally-competitive powerlifter, he wears his veganism on his sleeve, and he walks his talk in everything that he does. The Way of the Vegan Meathead will equip you with everything you need to become the best version of yourself, as a powerful, confident, and inspiring vegan athlete.” ─Robert Cheeke, New York Times Bestselling coauthor of The Plant-Based Athlete

“Daniel is a vegan superhero if there ever was one. Anyone who is looking to improve their mental game, and do it with purpose, should be reading The Way of The Vegan Meathead.” ─Giacomo Marchese, co-founder of VeganProteins.com and Team PlantBuilt

“If you want to be a beast like the strongest beasts: gorillas, elephants, rhinos, and other vegan powerhouses of the wild, Daniel Austin shows you how. In addition to being an accomplished athlete, Daniel is incredibly passionate about helping others become their best version of themselves, having compassion for all, and I would totally take his advice.” ─Toni Okamoto, Plant-Based on a Budget

“Daniel Austin lives many lives — all uniquely intriguing, uniquely profound, uniquely eloquent, and uniquely brutal. The Way of the Vegan Meathead is uber-essential for anyone who vibes with the title.” ─Shawn Macomber, Decibel Magazine

“The Way of The Vegan Meathead is an excellent read for anyone interested in veganism and lifting. Daniel writes from the heart about his personal experiences of being a ‘Vegan Meathead’ and shares his unique perspective. Daniel is the perfect example of what it means to be a compassionate man.” ─Natalie Matthews, Fit Vegan Chef and IFBB Pro

“Daniel Austin is one of the few vegans in the game who doesn’t sugar coat what it takes to be a strong vegan athlete. We need more voices like his in the community who are willing to tell people to work hard and eat more vegan protein. Green juices ain’t gonna cut it!” ─Dani Taylor, co-founder of PlantBuilt and Vegan Proteins

“Daniel Austin is a pioneer in the vegan lifting space. He has been an inspiration and source of knowledge since I first touched a barbell as a vegan. His new book is a wealth of knowledge from a true expert on the subject.” ─Nick Squires, IPL World Powerlifting Champion

“Moving my gym to Norfolk means I have had the privilege of hosting Daniel for workouts a number of times when he visits. I got to see him squat 430 pounds for reps and deadlift over 500 pounds leading into his next competition. I know his passion for strength and vegan food is second to none. If you want to learn about the profound benefits of a plant-based diet on performance, then listen to what this man has to say!” ─Ed Bauer, NewEthic Gym (Norfolk, VA)

“Strong, funny, and hella tough, Daniel brings complete focus and dedication to everything he does, from hardcore to powerlifting, all the while keeping hard topics entertaining and interesting. He’ll make you laugh while getting completely epic and yell ‘Vegan Power!’ as you lift more than you ever imagined.” ─Holly Noll, Resilient Strength Gym (Oakland, CA)

“The Way of the Vegan Meathead is a goldmine of straight-up, no-bullshit advice to power your training on a plant-based diet, and embody the vegan beast you know you are. As one of the top myth-busters in our field, Daniel lays out everything you need to fuel and recover from your strength training in a straightforward, easy-to-digest manner.” ─Karina Inkster, author of The Vegan Athlete

“Daniel Austin destroys the myth that vegans are wimpy elitists. The Way of The Vegan Meathead is a fun, easy read that will have you pumped and ready to crush it at the gym!” ─Bill Muir (a.k.a Sgt. Vegan), author of Vegan Strong

“I’ve been training for powerlifting since reading the first edition of The Way of Vegan Meathead. I started working out a few years after becoming vegan, but without the proper nutrition and programming, I encountered a lot of plateaus as a beginner. Daniel really helped me get on track and come up with a consistent plan for me to follow. Since then, I’ve conquered many of my strength goals including benching over 315 pounds and deadlifting over 500 pounds. I owe it to Daniel for his guidance about nutrition, programming, and for giving me the structure I needed to enter into the world of vegan strength.” ─Nicholas C., Texas

“I’ve been lifting weights on a plant-based diet for almost a decade now, but this book made me rethink everything I believed to know about nutrition and especially supplements like creatine. Sure, some might say it’s “bro-science,” and to those I can only reply: So what? It fucking works.” ─Tim R., Germany

“I’ve been vegan for 16 years, but never considered powerlifting until reading The Way of The Vegan Meathead! Daniel is extremely knowledgeable about what it takes to perform at a high level and lift HEAVY! He gives insightful answers to the age old question of, “Where do you get your protein?,” with plenty of examples and lots of different meal plans! He makes it known in his book that you don’t need to eat meat to lift heavy!” ─Chris N., New Jersey

“At 58 years old, 180 pounds and obese, I decided to square up and get in shape. My choices for training are kettlebells and CrossFit. The other vegan athlete books on diet caused me to bomb too many times. This book taught me how to calculate protein, calories, carbs. One year and nine months later, at 60 years old, I’m 120 pounds of muscle, competing at 16kg kettlebells, I won my first championship, 2 CMS, and top-ranked all my competitions. If you’re a vegan athlete that crashes before the week is over, buy this book!” ─Hafoc S., Washington

“After a decade of veganism and feeling like I’ve really become in-tune with my body through my diet, I constantly was experimenting with my diet for whatever goals I had at the time. When it came to strength, finding Daniel’s food examples and macros in The Way of The Vegan Meathead blew my mind. For the first time, I was getting stronger at a faster rate without putting on 20 pounds to do it. Not to mention, it’s super easy and convenient.” ─Jerry S., Arkansas

“Here in the Vegan Meathead methodology is where I found true growth as a vegan lifter with Lupus. From diet-specific insights to paths in strength training, you get a firm path to follow. There isn’t a quick path, but you get the insights to make true gains in the strengthening of your diet, mindset, and training. After a few years struggling to see gains as a vegan lifter with Lupus, I found The Way of The Vegan Meathead, and it has truly given me the path to lasting strength.” ─Adam W., California

“Whether you’re a committed powerlifter, routine-oriented exerciser, or casual fitness observer, this book has so many important principles for exercise and nutrition that I haven’t found anywhere else as a vegan. As someone who has bounced around between those identities, Daniel’s dynamic writing style is one that you can really commit to memory as you navigate throughout your fitness journey. Whether it’s tips for how to supplement your protein sources to support your daily routine, or knowing what foods are productive when you’re lifting (ex. Clif Bars are ‘runner’s food’), or proving that modern meat analogues are not the primitive substitutes of yesteryear, the takeaways from this book truly help to create a firm foundation for you to stand on and build off of. Because of this book, I now consider myself to be educated in how I treat my body for performance instead of just guessing!” ─Thomas V., Oregon

“I grew up the chunky kid, slamming down anything on a plate put in front of me. When I became old enough to make my own choices, my choice was to eat better for myself and the animals around me, so vegan was the way to go. Then I made the choice to start working out for my health as well, but everything you read about is “tofu equals titties for men,” or “you’re not tough unless you eat meat,” or all the typical bullshit we are fed—which sucked for me since I wanted to bodybuild. Then I met Daniel, who was slamming weights and making the earth shake, all on a vegan diet. He and his book made me realize going vegan really is “so simple it’s stupid.” Even when I was crushed (literally) by a drunk driver, had to learn to walk again, and start from ground zero, I knew which book to read. My doctors were amazed at my recovery time and said it was probably because of the lack of inflammation in my body due to not ingesting meat. So if you like sarcasm, meal plans for gains, and seeing you’re not alone in the journey, I’d compare this book to a heavy breakdown that makes you make an ogre expression. It’s in your face, raw, and it motivates you to move mountains.” ─Michael L., Hawaii

“Daniel’s book is evidentiary proof of what I’ve been trying to convince my omnivore gym friends for years: that vegans can lift just as much if not more than meat eaters, and salad isn’t gonna get anybody the gains they want. Eat for fuel, save the animals, and fuck the haters.” ─Rachel L., Oregon

**Refunds will not be issued for read books or e-books. If you read the book and decide the approach to nutrition I am proposing is not for you, that's completely fine, but once you have consumed the information in this book which took me more than a decade to learn by trial and error, you cannot just give that information back. I admit that this book is not a conventional approach to nutrition...that's why it works for many people. Read at your own risk. You might just learn something that helps you. If not, well then, you got a new perspective on vegan nutrition, and if you know the information, it may very well help someone else.